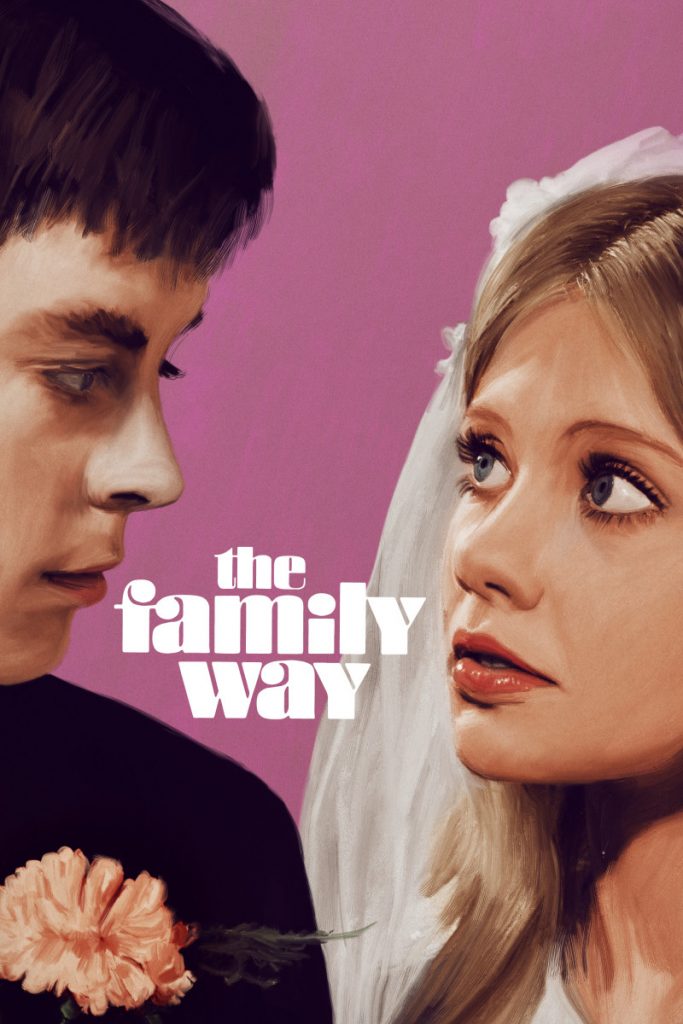 Based on Bill Naughton’s warm-hearted play ‘All In Good Time’, and directed by the Boulting brothers – Roy and John – The Family Way is a tender and funny exploration of the emotional impact of the Sixties sexual revolution focusing on two sensitive youngsters whose failure to consummate their marriage threatens to derail their life together before it has even begun. Featuring an original soundtrack by Paul McCartney (with George Martin) The Family Way stars Hayley Mills (Whistle Down The Wind) and Hywel Bennett (Loot) with John Mills, Marjorie Rhodes, Avril Angers, John Comer, Wilfred Pickles, Liz Fraser, Murray Head and Barry Foster.

Following the ceremony and a rowdy reception in the local pub Jenny Piper (Hayley Mills) and Arthur Fitton (Hywel Bennett) return to the Fitton home to spend their first night together only to find that Arthur’s father Ezra (John Mills) has returned with the drunken party guests. When they finally retire the marital bed collapses thanks to a practical joke played by Arthur’s boorish boss (Barry Foster) and the following morning the couple discover that the travel agent who sold them the tickets for their honeymoon to Mallorca has absconded with all their money. Unable to get a home of their own, Jenny and Arthur continue living in the crowded Fitton house with Arthur’s parents and brother Geoffrey (Murray Head) where the thin walls and lack of privacy exacerbate Arthur’s discomfort. As days pass into weeks, the marriage remains unconsummated, and the strain between the couple steadily worsens and gossip about their dilemma spreads.

Included in the special features is a new interview with Beatles biographer Chip Madinger on Paul McCartney’s soundtrack, which in 1966 was officially the first solo release by a member of the group, the 1961 Armchair Theatre production of Bill Naughton’s original play titled ‘Honeymoon Postponed’, the original trailer and a stills gallery.

For the 2020 restoration of The Family Way, STUDIOCANAL went back to the original camera negative where possible and alternative sources where severe damage that could not be repaired was encountered. These elements were scanned at 4K resolution in 10bit and then restored in 4k.