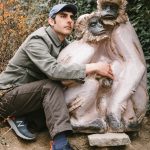 The director and screenwriter known for Monster House and City of Ember picks The Elephant Man.

My favourite film memories connect place to film. I can vividly recall every cinema where I saw films growing up that inspired or challenged me. Each of those spaces becomes inextricably linked with the experience of watching the films themselves. Likewise, the sprawling suburban video shop near my house in the San Fernando Valley, whereas a kid I was allowed to roam the aisles freely and be lured by VHS covers into different worlds. It wasn’t long before the CULT section of the stacks reeled me in, with its bizarre, creepy, otherworldly film titles and covers. It always felt like bringing a film up from this section to the rental desk was a silent rite of passage. Like the teenage dropouts in red vests who worked in the store looked at me with something a bit less than their usual withering disdain. I was one of them.

David Lynch’s The Elephant Man shocked me before I ever saw it. I remember hearing my parents discussing it with friends when I was very young, four or five. The imagery that the overheard conversation conjured was nightmarish, a mother crushed by a herd of stampeding elephants, and the disfigured infant that resulted from the violence. I had to build up courage to finally choose that film to rent… the grainy, high-contrast cover with a grotesque shrouded form promised to deliver on my expectations.

Then I watched the film, and it was a revelation. A sweet, tender and loving portrayal of human nature. One would never imagine that something so kind and sentimental could be wrapped up in so much foreboding. I fell hard for the film. It was my first David Lynch experience, and so my first time truly understanding the role that sound can play as an artistic medium separate from picture and music. I became interested in how it was made, and by whom. I saved up for my first special FX make-up kit, and attempted my own fumbling efforts at human disfigurement.

I can still see the VHS box art for The Elephant Man, facing out in the aisles. It’s like the video store employees knew that the ones who needed the film would find it. Glad I did.