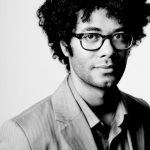 The actor from The IT Crowd and Director and Writer of Submarine and The Double picks Billy Liar and The Third Man.

So this is just a few thoughts about Billy Liar. Which won’t be terribly articulate, so apologies… I can’t remember when I first watched Billy Liar, but I think was probably quite a big influence on Submarine (a film I directed a while ago).

Some things that stuck with me –

So that was something that we tried to remember with Oliver Tate, the central character in Submarine (based on Joe Dunthorne’s book).

The other film I’d recommend is The Third Man by Carol Reed. A Graham Green scripted film. I think the films Carol Reid made around that period: The Fallen Idol, The Third Man, Odd Man Out, are some of the best British films ever. Particularly, Fallen Idol. The Third Man has the sense of post war decay that films like Rossellini have, but maybe there is more magic to The Third Man. It’s more in the Hollywood tradition than the more European Neorealist tradition. Or perhaps what was interesting about British films at that time is that they seemed able to combine the best aspects of European cinema with the best aspects of Hollywood story telling.