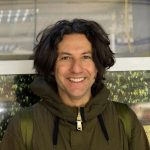 The director and writer known for Under the Skin, Birth and Sexy Beast picks Billy Liar.

I was introduced to the land of cinema by my dad. He bought a VCR in the mid-seventies and built up a library of films he recorded from the the TV. I’d sit on the floor next to his armchair and watch them with him. Billy Liar by John Schlesinger, about a young fantasist, looking for escape felt like it was made for me. A parallel world beckoned. Like hearing David Bowie for the first time through the closed bedroom door of my friend’s older brother.